“Oh, look, Susie! Your dolly even comes with her own mug shot and fingerprinting kit!”

Perhaps like the American Girl dolls, prison-made ones would come with names like “Back Alley” Sally, Machine Gun Mary or Rachel the Rat. (Folsom’s Condemned Row came to be known as the “back alley”). 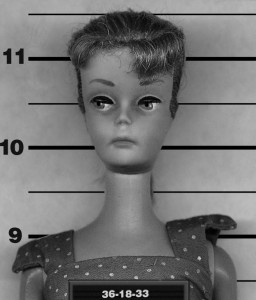 Ok, that’s a bit of an exaggeration, but in 1921, Folsom prison warden Court Smith, proposed opening a toyshop at the prison. Smith and San Quentin’s warden, James Johnston, both recommended the men would receive compensation for their work and hopefully learn skills to find legitimate jobs once released from the clink.

The idea creates quite a picture in one’s mind: the calloused, scarred hands of hardened criminals making dolls and stuffed animals for children; bolts of floral-patterned fabric lining the gray granite walls and colorful paper decorations hanging from the ceiling.

Surely, there would be jovial Christmas tunes playing in the background. Instead of letters to the North Pole, children everywhere would address their holiday wish list to Repressa, California.

At Folsom, inmates were used to working. They basically built the prison themselves, as well  as all later additions using the granite quarried from the surrounding area. For a brief time, Folsom housed a furniture shop and at San Quentin, scores of inmates produced jute mill bags. Using all convict labor, the toy factory would have been built using stone from the quarry and employed prison stonemasons, machinists, and eventually, manufacturers.

The proposed factory failed to receive approval from Legislation, who felt there would have been too much competition from Germany and other foreign countries to warrant the idea. So unfortunately, finding a rare Folsom “Sandy The Squealer” doll with a anchor tattoo stitched into her arm, isn’t going to show up at the Folsom Prison Museum.

WHAT DO YOU THINK OF PRISONERS MAKING TOYS?