In 1900, George Putman, Folsom’s 13th execution, attempted to set up a plea that when he killed a fellow inmate, he was already serving a 10-year sentence. As the ward of the state, he considered himself legally dead. How could a dead man commit a crime, right?

Perhaps he took a cue from Elijah Cravens, discharged of a murder thanks to a county record showing him to be legally dead. Craven’s story began in 1880 in the mining town of Leadville, Colorado. At the time, the promise of abundant silver brought fortune-seekers from all over, many unaccustomed to the severe climate. It also invited an influx of crime and vice and the death toll rose to staggering numbers. The Leadville Undertaking Company found themselves overwhelmed and understaffed. 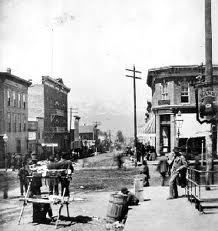 Early one morning, the death wagon arrived at the morgue with what appeared to be a dead guy. In his haste, the coroner certified the deceased as Elijah Cravens who came to his demise by consumption. The coroner transcribed the death into county records and placed the body in a coffin. An old deaf man drove the wagon to the cemetery, but while en route, Cravens emerged from his drunken stupor and kicked himself from the flimsy casket. Without asking questions, Cravens escaped. When the old superstitious driver discovered the empty coffin, he proceeded to bury it and placed a inscribed board at the head of the grave that read: “Elijah Cravens. Aged forty.”

Craven’s near-death experience prompted a change in him. He gave up alcohol, stayed away from his usual haunts, and avoided people when possible. Then he met “Diamond Dick” Reynolds, a wealthy Leadville prospector who offered him a job. He asked Cravens to locate a ranch near Grand River. Cravens agreed and ended up staking valuable land near what is now Glenwood Springs. It proved to be a very lucrative endeavor, earning Cravens thousands of dollars for his role in  establishing the ranch.

After a few years, however, Craven’s mind allegedly began to deteriorate, and he exhibited bouts of uncontrollable anger and hostility. He started drinking again and in September of 1885, he shot and killed a man during a saloon brawl. With the help of an accomplished attorney, Cravens produced the Lake County records indicating he had died five years earlier. According to the law, Cravens was dead, therefore, incapable of committing a crime. The judge didn’t plan on letting Cravens off that easy and sentenced him to one year in jail.

On August 22, 1900, seventy-year old, Elijah Cravens died of pneumonia at the Lake County Hospital in Leadville . . . his last death on record.

One thought on “The Peculiar Case of Elijah Cravens”