“You can’t take it with you.” We’ve all heard this phrase when referring to death, but it also pertains to going to prison. But that won’t stop people from trying.

Today, I bring you a great post from  writer, Jason Brick who as you may recall, posted a stupid criminal story earlier. Jason has volunteered in prisons and has taught self-defense to prison guards and  parole officers. He has heard his share of stories and seen plenty. This story, I’d much rather read about, than see. 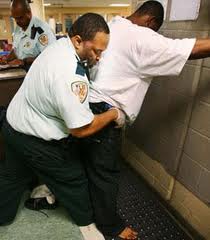 When you go to jail, they take all your stuff. Sure, they provide you with clothing, toiletry, reasonable access to books and writing implements. But some things — especially drugs, money and weapons — you’re going to have to do without.

Unless you smuggle it in. Criminals are creative and resourceful when it comes to smuggling stuff inside, just as prison staff has become resourceful and thorough about stopping them. One of the more…interesting…ways to bring contraband into jail with you is a practice called “keistering.”

It’s pretty much exactly what it sounds like. When you keister an object, you insert it into your rectum and push it in far enough that a normal cavity search won’t spot it. Once you have a little privacy, you push it out the same way you do when going number two. Gross, but effective.

However, the annals or criminal anality occasionally bring to light stories of keistering that boggle the mind…

And sometimes, criminals get overly enthusiastic…

In March of this year, a California man was caught with a keistered contraband cache including a cell phone, MP3 player, headphones, marijuana, tobacco and $140 in cash.

And to think he eventually planned to put that marijuana and tobacco in his mouth.