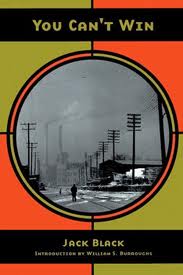 I just finished this autobiography, published in 1926, by Jack Black, chronicling his life as a petty thief, burglar, and opium addict. Black’s crime career began at the age of 15 and for the next thirty years, he shuffled in and out of jails and prisons, including Folsom. In fact, Black was in the midst of an eight-year term at Folsom when the infamous break of 1903 occurred. Though he didn’t partake in the escape, he and fellow inmates received the brunt of the guards’ anger over the break—in the form of the straitjacket. Guards P.J. Cochrane and Richard Murphy (called “Dirty Dick” by the prisoners) relished in using the torturous device.

“After the break Folsom was hell. The warden and Captain Murphy began taking revenge on friends of the escapees . . . Warden Wilkinson was removed and Archibald Yell of Sacramento, took his place. He had no experience and was forced to feel his way slowly. He had to depend on Murphy. This put him in virtual control of the convicts and his lust for revenge went unchecked. I was on the list and he soon got me.”

Cochrane, tightening the jacket, said to Black, “You fellows tried to kill me; now it’s my time.” Black endured the “bag” for over three days, lying on the floor of a dark concrete cell. This punishment caused disfigurement, broken bones, and even death to many California prisoners between the late 1800s and 1912 when Warden James Johnston banished it.

Black, considered an “honorable outlaw,” earning the respect and admiration of not just fellow thieves, but lawmen as well, finally kicked the crime (and drug) habit in the mid 1920s. He published his memoir in hopes of warning young men from becoming criminals and dope fiends. He also hoped to change the ways of prisons—show the institutions that the use of cruel punishments and the death penalty did nothing to deter crime; that it merely made men more vindictive and revengeful. Black became an outspoken advocate for prison reform and opponent of the death penalty.

“What, in a nutshell, is my case against the right people? I contend that more laws and more punishment will mean nothing but more crime and more violence . . . We need more emphasis on prevention than on punishment . . . The secret of the cure of crime—if there is one—is contained in a knowledge of its causes . . . The right people are working on the wrong end of the problem. If they would give more attention to the high chair, they could put cobwebs on the electric chair. They lay too much stress on what the wrong people do, not on why they do it; on what they are instead of how they got that way.”

Black, who took care of his friends and harbored no ill-feelings against his enemies, became the librarian for the San Francisco Call after leaving his life of crime. He wrote several articles for national magazines and penned many prison dramas for MGM. Fame and recognition soon dwindled, as well as his bank account, and it is said that in 1932, Black committed suicide by drowning in New York Harbor, although his body was never found.